MTV
Season 8 is the eighth season of the improv comedy show Wild 'N Out on MTV. The season premiered on August 4, 2016 with Tyga and ended it's summer season finale with Stevie J and Joseline Hernandes/Yo Gotti which aired October 6, 2016. The second half of the season premiered on March 2, 2017 with 2 Chainz and ended with two episodes Deontay Wilder/Tory Lanez and Omarion/Safaree on MTV. This is the first season since Season 4 to be filmed in Los Angeles, California and air on MTV. This season has a consist of 21 episodes.

The series was renewed for a eighth season as this season was filmed in Los Angeles at the CBS Television City Studios, the original location where the first four seasons were filmed and went back to airing on it's original channel, MTV. Before the season's premiere, a special touring series aired on MTV2 titled Wild 'N On Tour which features Nick, DJ D-Wrek, and some of the cast members taking the show on tour to many college universities around the U.S. and the United Kingdom. 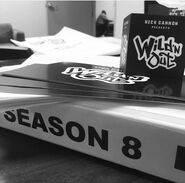