VH1
Season 16 (also known as Wild 'N Out: In the Dark) is the sixteenth season of the improv comedy show Wild 'N Out on VH1. This season features a similar format to the previous season where host Nick Cannon will lead team "Revolution", while the celebrity guest (that will appear as a hologram) leads team "Evolution". The season premiered with the Wild 'N Out LIVE Interactive Special and two episodes: Fat Joe and Latto on August 10, 2021.

This season was renewed by MTV back in March 2019, apart of the show’s expansion for 90 episodes. This season was filmed from June 8 to June 17, 2021 in Los Angeles, California. 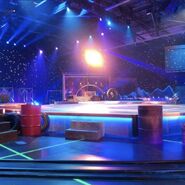