2011-present
Natalia Pitti, (better known as MyVerse) is a American rapper, songwriter, poet, emcee, and humanitarian best known for being a battle rapper in the SMACK/URL circuit, a member of the "Rock Steady Crew", and for being a contestant in the So You Wanna Wild Out competition for the improv comedy show, Wild 'N Out on MTV and VH1. She was one of the new cast members of Season 13.

Hailing from Orlando, Florida, Natalia Pitti was exposed to art at a young age with her taking ballet classes at the age of 12 and began writing poetry when she became a teenager. Pitti grew up with a musically talented brother who introduced her to music that wasn't usually played on the radio which had help created her love for hip-hop and rap. Pitti started doing spoken word performances and even started her own open mic nights called "Prolific Mondays". She also became a member of "Team Orlando '09" for the National Poetry Slam.

In 2010, Pitti became a member and an emcee for the "Rock Steady Crew" after opening up for them at an event. Pitti later became interested in the rap battle circuit as she would participate in her first battle against battle rapper Villun in 2016 and later became a battle rapper in the SMACK/URL rap circle. Though she only has participated in 8 battles in the SMACK/URL circuit, her battles altogether have gathered over 1 million views in total.

In 2017, Pitti participated in the "So You Wanna Wild Out" competition that took place in Times Square to win a place as a cast member on the improv comedy show, Wild 'N Out on MTV. She then competed and won in a rap battle against host Nick Cannon. Her video gathered over 3 million views on YouTube. Pitti later starred in the music video for rapper Taboo's "Stand Up/Stand N Rock #NoDAPL" which earned her a MTV Video Music Award. 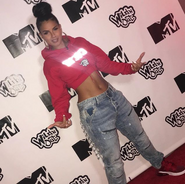 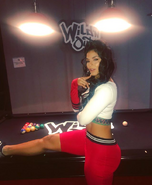