2002-present
Antoine Davis, also known as (DeRay Davis) is a American stand-up comedian and actor. He is best known for his role as Ray-Ray the Hustle Guy in Barbershop and Barbershop 2: Back in Business. He's also had roles on shows such as Reno 911 and ComicView. He was one of the recurring cast members from Season 1 until Season 8 and his return in Season 15 of the improv comedy show Wild 'N Out on MTV, VH1, and MTV2.

DeRay began his career in comedy clubs, shortly after moving to Los Angeles. He won the Comedy Central Laugh Riots Competition and was a standout for the Cedric the Entertainer Tour. He is best known for his role as Ray-Ray the Hustle Guy in the two Barbershop films. He's also had roles in numerous films such as Semi-Pro, 21 Jump Street, All Eyez on Me, and Meet the Blacks. Davis appeared on several skits on Kanye West's first two albums, "The College Dropout" and "Late Registration", mostly impersonating comedian Bernie Mac. He has also hosted the game shows Mind of a Man on the Game Show Network and Joking Off on MTV/MTV2. Davis is currently hosting the revived version of Hip Hop Squares, which airs on VH1 and is executive produced by rapper Ice Cube. 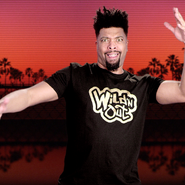